Finsemble’s new “Smart Desktop Designer” delivers a smart desktop in under an hour – with no coding.

August 25, 2021//Charlottesville, VA. Cosaic, the workflow solution provider bringing data visualization and smart desktop technology to the finance industry, today announces a breakthrough in how firms can integrate applications for automated workflow. With the launch of Finsemble 6.0, applications of any type can now be integrated with no code, eliminating the need for developer support and addressing the needs for business agility.

With Finsemble 6.0, citizen developers can now use Finsemble’s Smart Desktop Designer to build an integrated workspace in under an hour with no code, freeing up the firm’s valuable and expensive development teams (which is one of the main drivers behind the no-code revolution). According to a Gartner forecast, low-code tech development will grow 23% this year, and in an Appian report 80% of developers said low-code “can both eliminate time spent on repetitive tasks and free up developers to do more high-level work.”

“The Smart Desktop Designer is an entirely new way to think about Finsemble,” says Eugene Sorenson, Cosaic Chief Product Officer. “In the past, smart desktop projects required large development efforts and often took months to get into production. Agile businesses expect to see value right away. Finsemble now delivers a SaaS-like experience—easy to configure and put into production—all while maintaining the on-premise security our customers expect.”

Finsemble also provides out-of-the-box support for the industry’s FDC3 data integration standard. Any application built with the FDC3 API (such as Bondcliq and FactSet) can automatically share data within a Finsemble workspace with no coding required.

Finsemble still offers a robust set of developer APIs to take customization to the next level. For more information, visit https://cosaic.io/finsemble/ or check out the recording of our recent webinar above. 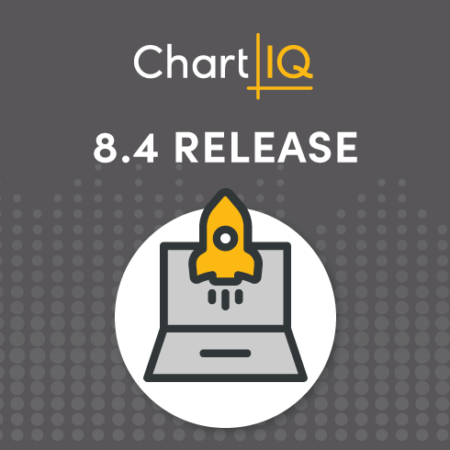 Sometimes more CAN be better – especially when you have traders looking for a large offering of tools to educate themselves and/or make better decisions on behalf of their clients. In our 8.4 release we showcase the newest additions to the ChartIQ library to impress your traders and help them make better and faster trade decisions.